By the end of the Nineteenth Century, a large number of literary journals were published in France. They appeared as Parisians started to achieve the income, education and leisure necessary to appreciate them. It was an exciting time with major transformations in the arts and literature as cultural modernity emerged. Interest in these subjects intensified during the Gay Nineties. Journals suchs asLe Rire, Le Courier Français and Le Cri de Paris satisfied a thirst for new information. They provided young artists an excellent opportunity to make money at their craft. Pierre Bonnard, Maurice Denis, Paul Ranson, Latrec and Hermann-Paul were all featured in contemporary journals. Much of the work produced in these journals still survives. It is often prized by collectors.

Hermann-Paul’s illustrations frequently appeared in Le Rire, Le Sourire, and  Le Escarmouche. They were often featured prominently on the front and back covers. His illustrations represent a stylistic departure from his lithographs. Their style was sparse with great simplification of form. Thin lines were accentuated by thick areas of black. When he wasn’t careful this style could get away from him and a “finished” composition could seem incomplete. Generally, his work was well received and publishers continued to call.

It was in the “Journaux Humoristiques” that Hermann-Paul seemed to find his voice. His work is noted for its satiric characterizations of the foibles of French society. He poked holes in the typical aspirations of middle class families. The bourgeoisie received much of his mockery but he lampooned all strata of Parisian society. Rich and old, powerful and powerless were at some point skewered by him. Artists also received playful mockery.

In October 1894, a thirty-five year old French military officer was arrested. He was charged with selling military secrets on to the Germans. Publicity surrounding the case touched off a firestorm. It received a great deal of attention in literary journals. France was divided between those who thought Alfred Dreyfus was guilty of treason and those who did not. Defenders charged the accusers with antisemitism. (Dreyfus was a Jew). In November he was quickly tried sentenced to sentenced to life in solitary confinement on Devil’s Island.

The case would have ended there if not for its continued coverage in the journals. Emil Zola was extremely vocal in his defense of Dreyfus. So was Hermann-Paul whose cartoons lampooned the military tribunal and its procedural flaws. The captain’s defenders touched off a cultural war that held the public’s attention for years. Before it was over, all Parisians familiar with the journals and news weeklies were aware of the artist’s work. Zola was relentless in his pursuit of the truth. The army needed resolution. 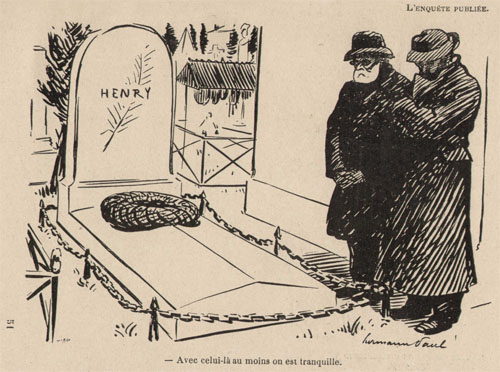 The Affair divided France between Dreyfusards and anti-Dreyfusards, between supporters and detractors of the convicted captain. The rift was generally between the political Left and Right. The right wing was firmly in the anti camp. In August 1899, Dreyfusards experienced vindication when one of the accusers broke down under interrogation. Hubert-Joseph Henry confessed what many felt was the case all along: the damning documents were forged. After Henry slit his throat in prison, Hermann-Paul produced a cartoon in which two Dreyfusards pay mock respect over the fresh grave of Major Henry. One says to the other, “This one, at least, won’t give us any trouble.” Avec celui-là au moins on est tranquille. 5

What is a culture war without heroes? Major Henry was lionized by anti-Dreyfusards. His admission of guilt did little to dampen enthusiasm. Charles Maurra, head of nationalist L’Action Française, declared his forgery one of the ‘finest acts of war.’ A monument was erected to Henry with proceeds gathered from the French anti-Dreyfusard public. It was erected in recognition of his support to their cause and the fact that his ‘heroic forgery’ enabled Dreyfus’ initial imprisonment.6

Despite the confession and new evidence of procedural improprieties, Dreyfus was re-convicted in 1899. The men in power hold all the cards. Dreyfus was eventually pardoned by the French president and freed from imprisonment. However, full exoneration did not come until 1906. When his country was attacked in 1914, Dreyfus was recalled to duty. He served admirably on the front lines at Verdun and Chemin Des Dames. He was promoted to the in Légion d’Honneur in July 1919. For years afterward, his family and his heirs refused to discuss the Affair.