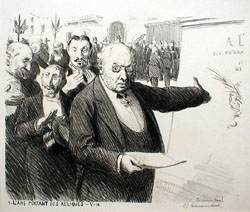 Description:
The original fable speaks of an ass that carries a religious image upon its back. A crowd gathers to view the image and the donkey takes homage as though the attention was focused on him and not the icon on his back. Pride brings him to a standstill and he refuses to budge. The driver beats the beast.

"The world is not so backward that men bow to asses," he exclaims.

The original fable was written by Aesop. In the 17th Century, Jean de La Fontaine produced his own version of the Greek parables. His writings remain in print to this day. Hermann-Paul illustrated the 1897 printing. In H-P's hands, the donkey becomes a jackass, the type person we cannot allow bring progress to a standstill.