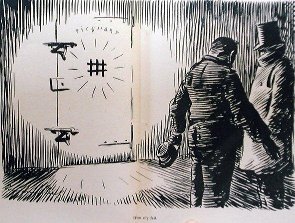 Description: Georges Picquart became a Dreyfusard after he identified Esterhazy as the author of the incrimiating document. For his testimony on Dreyfus' behalf, he was "discharged for gross misconduct in the service." He was stripped of his pension and imprisoned for several months. He was later pardoned along with Dreyfus. Picquart died in Amiens in 1914.