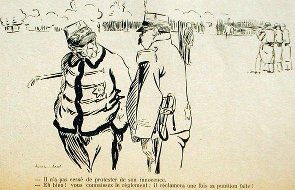 Description: As a firing squad readies to execute a prisoner, a regimental leader tells his superior, "He has not stopped claiming his innocence." The General replies, "And well! You know the rules: He will seek recourse once he has received his punishment."