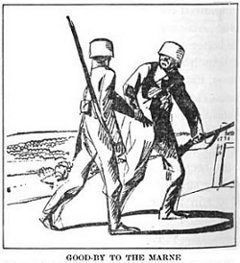 Goodbye To The Marne

Description: In September 1914, the advancing German army reached the suburbs of Paris. Six French field armies launched a counter-offensive along the Marne River. In Paris, taxi cabs helped deliver men to the front. They were able to beat back the German advance. In this cartoon, Hermann-Paul advises the Germans to "take a last look at the Marne. You won't see it again."