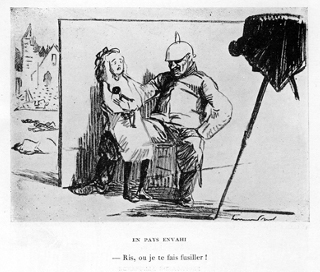 Description: At the beginning of the Great War, Germany attacked France throught neutral Belgium. The campaign was waged with more than bullets. A propaganda war erupted in which the Allies depicted German atrocity while the Germans depicted cheerful lives under their administrative authority. Here, Hermann-Paul rebuts those claims. A torn landscape is masked by an artificial background. A German solider poses for a photograph with a young Belgian girl. He says to her, "Laugh or I'll have you shot!"