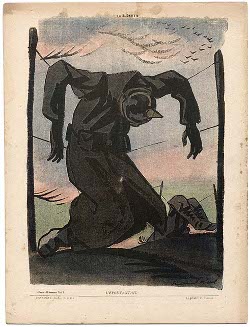 Description: Barbed wire was invented in the US in 1867. It was designed to contain livestock within a rancher's boundaries. It was soon adapted by the world's militaries as a defensive mechanism. In the First World War, many a soldier was killed when he became tangled in wire. In this piece, a dead German infantry man was unable to fall to his final resting place. Crows flee as their dark bodies silhouette against an ominous sky. Hermann-Paul entitled this piece "L'Epouvantail" or the Scare Crow. Hermann-Paul was 51 when the war erupted in Europe. It's unclear from whence he witnessed the imagery that he relied upon for his depiction of the war. For his work, he generally relied on first hand observation so while he may have worked from photographs, it's likely he neared the front or toured abandoned battlefields.