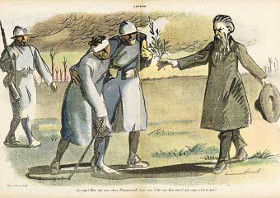 Description: "Peace! Of course, my old Zimmerwald but you are no more anxious than we, are you not?"

Zimmerwald refers to a socialist summit which was held in 1915 in Switzerland. The assembly included participants from throughout Europe including those from both sides of the belligerent divide. Unable to agree on much, the assembly passed a resolution which expressed sympathy for the victims of war.

With this illustration, Hermann-Paul places some distance between his 1917 self and his pre-war past. The socialist sentiment is nice but hardly meaningful to the men in the trenches. Sure they want peace but it appears they also want victory.