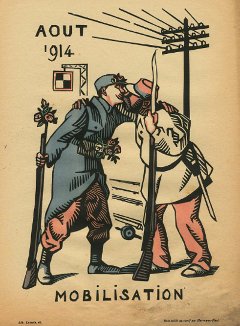 Description: Two soldiers from different units embrace on a railway platform. This is probably a chance encounter between friends at a congested station as their units prepare to disembark for the front. The man in blue is decorated in flowers, momentos from women who've bid him adieu. The opening salvos were chaotic and deadly and the first months of the war were by far the most bloody. These men will probably never meet again.