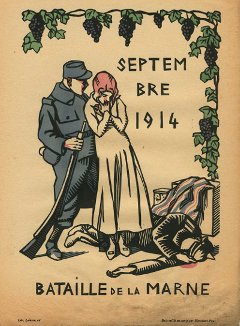 Description: After a month of fighting, the German army was at the suburbs of Paris. When turning to meet the French army to its right, the Germans opened a gap between their First and Second Armies. The BEF and the French Fifth Army poured through the gap and drove a wedge between the Germans. Meanwhile French reserves were ferried onto the battlefield in a convoy of Parisian taxis to hold the line which granted the Fifth army time to break through.

In this scene, a victorious French soldier comforts a Parisian woman as a German soldier lies bleeding at their feet. The Germans retreated at the Marne and dug in on higher ground. The Western front would remain more or less fixed for the next four years.