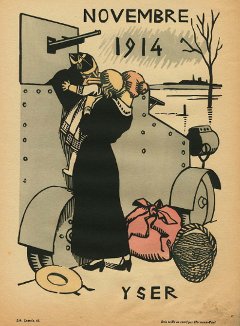 Description: A woman hoists a child to be kissed by a soldier in an armored vehicle. She is in flight and he's headed to the front. The landscape is flattened and the river has crested. The First Battle of Ypres was characterized by mud, blood and shells.

The town visible on the other side of the flooded river is probably Langemarck, which fell into German hands in November 1914. Otto Dix captured its destruction from the German perspection in his post-war retrospective Der Krieg. Otto Dix: Langemarck