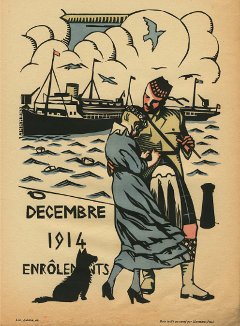 Description: A Scottish soldier embraces his woman on the quayside. A military transport ship floats in the background; a Scotty dog sits dutifully by her feet. Due to the kilts they wore in the First World War, the Germans referred to them as the "ladies from hell."

The men who departed in late 1914 were thrown into the trenches in an effort to bolster units whose ranks were depleted by the opening campaign but the worst was yet to come. These men would see significant action at the Somme, Ypres, Amiens and Arras. A total of 147,609 Scottish soldiers lost their lives in the war.