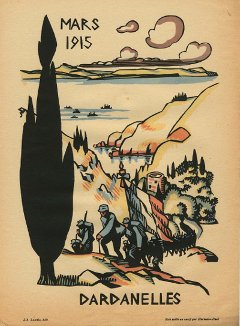 Description: The Dardenlles are a strategic waterway which connect the Mediterranean to the Black Sea. The Northern sea route to Russia was blocked by ice in Winter. If the Allies controlled the strait, they had sea access to their ally for twelve continuous months.

The strait was controlled by Turkish forts and the passage was mined to prevent ships from assaulting the passage. After the Royal Navy tried unsuccessfully to destroy the forts from the sea, the Allies launched a land assault in the spring of 1915.

As this print illustrates, the terrain was rugged and the assault force faced difficult challenges. After many unsuccessful attempts to assault the cliffs of Gallipoli, the Mediterranean Expeditionary Force was withdrawn from the pennisula. The idyllic view in this print masks the campaign's bloodiness. Over ten months of fighting the Allies lost 200,000 casualties.