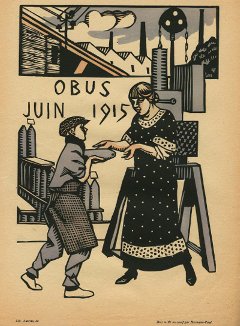 Description: By June 1915, all illusions of a short war had ended. In the west, the conflict was characterized by an entrenched stalemate. In the east, the Russian offensives were halted at Tanneberg and Ungvár. More materials were necessary to change the tide.

In order to supply its armies, the the allies diverted most industrial output to the war effort. With so many men at the front, women and boys were recruited by the munitions industry to meet demand.

Although it was dangerous work, many women felt liberated by the experience. It made them feel useful; they were essential participants in the war effort. It also granted them freedom and wages that had previously been enjoyed by men. They would not go quietly back to the kitchen once the war was ended.