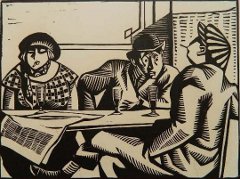 Three Figures In A Bar

Description: In a modern woodcut the gouge line is generally well pronounced. Lines are raw and edges are defined. In this medium it's hard to not strike a modern aesthetic. Working with gouges, the artist is compelled to pare the subject to its essence. The motif is a vehicle through which we can appreciate man-made artistry.

Stylistically this is a modern wood cut yet so is the motif. Prior to the 1920s, men tended to drink with men in public while women tended to children at home. This pattern began to change after the First World War. In this piece, Hermann-Paul not only cuts a modern design but he completes it with a modern woman.