By mid decade, Hermann-Paul was an established member of a group of young graphic artists surrounding Toulouse-Lautrec. His first lithographic posters were released in 1891, the year Lautrec produced La Goulue de la Moulin Rouge. The influence the group asserted on its members is apparent in those works. In 1895, Hermann-Paul produced his most famous contribution to modern poster art. It was a commissioned promotion for the seventh Salon des Cent.

It is a whimsical piece that features a flamboyant character with puckered lips and a floppy bow tie. The poster promotes the same bohemian artists that it satirizes. As Alexander Sturgis suggests, the radicalism of Courbet’s bohemianism had been replaced by artistic eccentricity.2 This was not man from whom you’d expect a raw  painting of naked genitalia. Far from threatening, the bohemian lifestyle was now an advertising tool.

The seventh Salon des Cent was held in the offices of La Plume on rue Bonaparte, Paris. The journal was founded in 1889 by Leon Deschamps. It was devoted to the idea of youthful free expression. The exhibitions were open to all artists and all types of media. The exhibition’s name was derived from the thought that it would showcase 100 top young artists. Limited space prevented the Salon from showing any where close to that number.3

Hermann-Paul’s Salon des Cent is often described as a self-portrait. It is a dearth of published photographs of the artist that allows this perception to persist. A surviving self-portrait from the period depicts him with dark hair and somber attire.4

By the end of the 19th Century, the arts were open to a wider audience. Two decades of economic prosperity had lifted all layers of society. The consumer age was at its dawn. When people achieve income beyond their needs, their next desire is often entertainment. Paris answered the call. By 1900, the city was home to more than two hundred night clubs and cabarets. Sometimes called “theaters of the poor” they offered a wide variety of cheap and sometimes risque entertainment. While they generally drew working class patrons, the cabarets were also frequented by wealthy loafers and the women attracted to them.5

In 1900, Hermann-Paul produced another iconic poster for one of these cabaret acts. Les Barrison  was a color lithograph with pale textures offset by bright areas of purple and yellow. The poster featured a line of girls somewhat more sober than the ones it depicted.Les Barrison promoted a troupe of five young women who performed regularly as the Barrison Sisters. The quintet sang and danced often at Les Folies Bergère, a cabaret theater in which audience members were teased with flashes of skin and under garments. The girls’ signature song was a called “Do You Want To See My Pussy?” A promotional photograph displays them as they comply to an affirmative response: 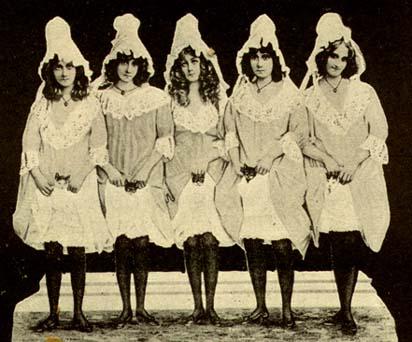