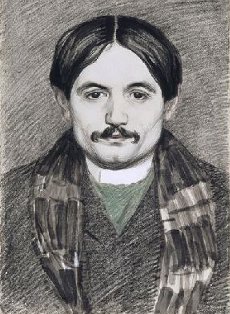 Description: Hermann-Paul sketched the playwright Alfred Jarry a year after he achieve fame with Ubu Roi. The premeire was attended by traditionalists and avant garde in equal numbers. The main character's very first word touched off a storm among the former. "Shit!" He intoned. Around the time of this drawing, Jarry attended a literary dinner. He got drunk and took exception with the Belgian poet Christian Beck. Jarry pulled a pistol and fired at him. He died in 1907 of too much tuberculosis, drugs and alcohol. His final request was for a toothpick.