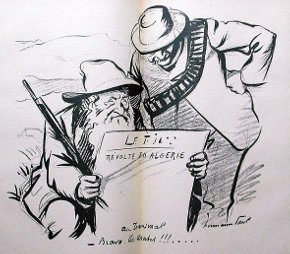 Description: After Zola published J'Accuse, antisemitic riots erupted in France. In Algiers, antisemitism was a platform with which the Opposition tried to unseat the establishment. The 1898 rioters sought repeal of the 1871 law that naturalized Jews in Algeria. They had strong ties to Socialism. Thus to Hermann-Paul, the riots appear to have a Left wing complexion. In the cartoon, two in the Transvaal cheer the Algerian rioters. The following year, the Second Boer War erupts. While his South African prediction was accurate his understanding of the situation in Algiers was not.