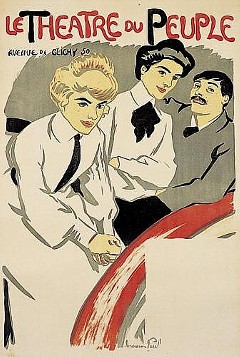 Description: This is an advertising poster for the People's Theater on Avenue de Clichy in Paris. It was opened by Henri Beaulieu, a popular stage actor, on November 14, 1903. The theater was an avant-garde experiment. Its seats were very inexpensive. They ranged from fifty centimes to two francs and a hundred tickets were distributed each week to poor children and workingman's societies.

Unfortunately, success did not follow this noble experiment. The Bourgeoisie were reluctant to attend shows for which they could not reserve seats. Others were repelled by its low ticket prices. "How good could it be if its seats are so cheap?" But the worst enemies of the People's Theater were the people themselves. "M. Beaulieu, we're as good as the bourgeois, you know!"