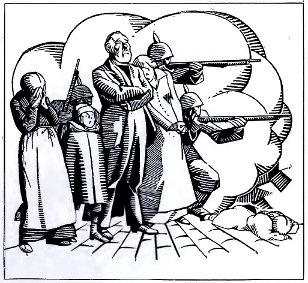 Description: This is an early black and white woodcut which probably dates to late 1914 or early 1915. It is very likely one of H-P's first works in the medium. (In this article, I describe my skepticism with woodcuts dated prior to 1914)

Before the First World War, Hermann-Paul's graphic arts were mostly done as lithographs, etchings and dry points. When war broke out, metal became scarce and the artist turned to wood.

In this scene, he depicts another chapter in the Rape of Belgium. German soldiers hide behind women, children and clergy as they return fire on the Belgian army. Any sympathy Hermann-Paul had for the international brotherhood of workers, dissolved when Germany invaded Belgium. His position on the war drew harsh criticism from former allies on the political left.