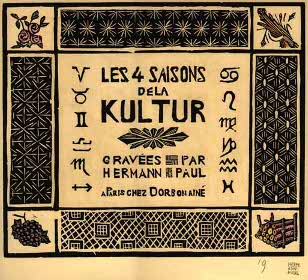 Description: Hermann-Paul was fifty when the German army launched its 1914 invasion of France. Its route to Paris was through neutral Belgium. News of German atrocities spread like wild fire. Most tales were exaggerated in order to produce sympathy for the neutral nation. In 1915, Hermann-Paul released a series of prints that depicted the early stages of the war. The medium was wood as metal was now prized as an implement of death. The series was ironically titled, The Four Seasons of Culture. The well executed series helped cement Hermann-Paul's reputation as a graphic artist but it drew criticism from the political left.