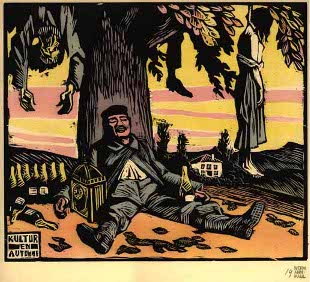 Description: During the 1890s, Hermann-Paul made his name as a harsh critic of the French army and military expansion. In this series, he simply moved his criticisms from France to Germany. To many on the left, this series was little more than propaganda designed to heighten tensions and prolong the war. How do you negotiate peace with the Kultur depicted in these plates? The series does seem out of character. As the war goes on, his true personality begins to reappear.