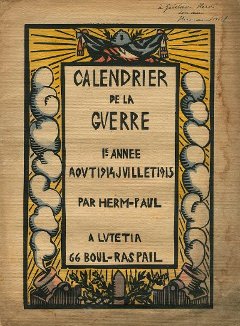 Description: Cover for the first folio of Hermann-Paul's Calendrier de la Guerre. This set includes twelve colored woodcuts each representing a month of the Great War from it's beginning in August 1914 until July 1915. In the first folio, each month is represented by a place, a battle or an event such as mobilization. The second folio depicts leaders and personalities.

This particular copy was signed by the artist and presented to Gustave Herve, a left wing critic of the army before the war who, like Hermann-Paul, became an advocate for the French army when it was all that stood between them and German imperialism.