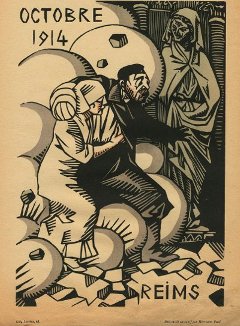 Description: The German army was in retreat after the Battle of the Marne but their capacity for destruction was not diminished. After the evacuation of Reims, the Germans covered their retreat with a hellish barrage from their big guns. The northeastern suburbs were destroyed. Airplanes wreaked havoc with bombs from above. A ghastly odor permeated the scene as the bodies of dead soldiers were incinerated.