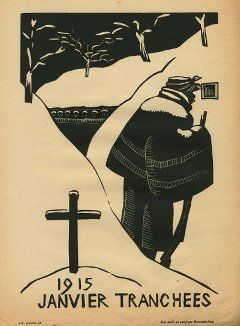 Description: Nineteen-fourteen was characterized by rapid troop movement. The Germans invaded France through neutral Belgium and converged on Paris. They were stopped in the suburbs by a gallant French defense on the Marne. After that defeat, the Germans were on the move again. This time in retreat.

By winter, German troops were able to consolidate a line of defense. They dug in to hold the position. The Allies dug in across from them and the stalemate on the Western front began. For three long years, both sides threw mass amounts of men and metal at the other in an effort to break through. When the war ended, the positions established in the winter of 1914-1915 remained more or less the same.

Here a soldier bundles himself with blankets to remain warm in the trench. In the foreground a grave is marked with a cross. Those types of markers would grow increasingly more prevalent...