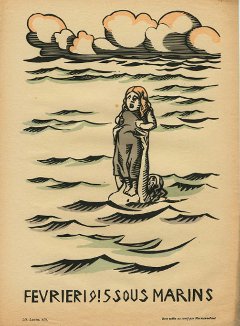 Description: Unable to break through the German line, the Allied strategy turned to starvation. By leveraging the power of the Royal Navy, the Allies established a blockade of Germany. The goal was to deprive the enemy of food and material. The German High Seas Fleet made just one unsuccessful attempt to break through.

Unable to defeat the Royal Navy with ships, Germany turned to submarines to cut supply lines between North America and Britain. These underwater vessels attacked with little warning and sunk many merchant vessels. After sinking the RMS Lusitania and killing many civilians in 1915, Germany attempted to quell international outrage with promises to end attacks on passenger liners.