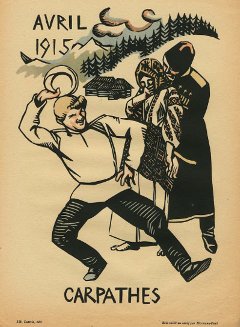 Description: In January 1915, the Russians launched an offensive in the Carpathians. The objective was to reach the Hungarian plains and knock Austria-Hungary out of the war. In response, the German high command transferred six divisions south to aid its ally against the assault.

While this illustration depicts local joy as the Russians neared Ungvár in April 1915, the campaign was an extremely bloody affair. Almost two million men were lost on both sides after just four months of fighting. The campaign concluded unsuccessfully after Russian supplies and ammunition were depleted.