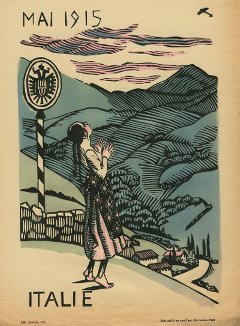 Description: When the war began, Italy was in an odd position. It was allied with participants on both sides of the conflict. It was bound to Germany and Austria-Hungary by terms of the Triple Alliance of 1882. It was also allied with France under terms of a secret alliance. To settle its conflicting obligations, Italy chose neutrality.

In May 1915, Italy was pursuaded to join the allies under the terms of the 1915 Treaty of London. In return for their participation, the Italians were rewarded with promises of territorial expansion. Unfortunately for Italy, many of those promised gains never materialized after the war.