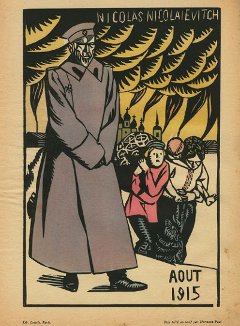 Description: In August 1915, Czar Nicholas II took personal command of the Russian armed forces against the wishes of nearly all his advisors. By doing so, he essentially tied the fate of his government to the mast of the war effort.

From the moment he took command, Nicholas removed trained professionals from military leadership roles and distanced himself from the seat of political power. This move proved disasterous for the czar, his family and the country.

Smouldering ruins and shocked faces provide foreshadow. Nicholas was still in power when Hermann-Paul produced this print but the Czar's move was criticized by the Western allies. That criticism was proven correct by the time this print was published. Revolution gripped Russia the following year.