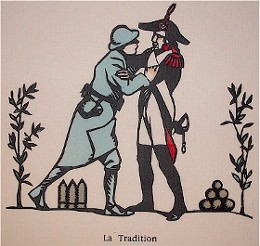 Description: From the onset of his career until the outbreak of war, Hermann-Paul depicted the army in the harshest light. The French army unjustly sentenced Dreyfus to Devil's Island and refused to acknowledge the error. It ruled the colonies with force. Like many on the political left, Hermann-Paul could barely contain his contempt.

By 1917, the French army was the only thing that stood between him and German imperialism. Such changing circumstances forced a reassessment. As the Great War raged, H-P celebrated French military tradition from 1917 back to the Napoleonic period, a span the included the Dreyfus Affair and colonial expansion, two traditions he had formerly derided. When the war ended, so did his political commentary. His focus after 1918 was strictly fine art.